You may know that last Monday was Fred Korematsu Day of Civil Liberties and the Constitution, a day which honors the legacy of Fred Korematsu, who fought for racial equality, social justice, and human rights. In 1942, Korematsu stood up to the Executive Order that put Japanese American citizens in internment camps during World War II, after Pearl Harbor, when anti-Japanese feelings were high. He was arrested for refusing to relocate, and he challenged the constitutionality of the executive order.

The case made its way to the Supreme Court. Ultimately, he lost when the majority of justices saw the detentions as based on suspicions that Japanese-American citizens were spies, not based on racial discrimination. Although he was awarded the Presidential Medal of Freedom in 1998, marking him as a hero for civil rights, he is still relatively unknown compared to other civil rights leaders.

I thought of Mr. Korematsu last week in the wake of President Trump’s executive order that banned travel from seven Muslim-majority Middle East countries. As you might imagine, students had questions and concerns about the implications of this order, so our Level 8 students decided to sponsor a teach-in for the middle school. They educated their peers about the specific details of the executive order, whom it affected, and why some people supported it and others challenged it. 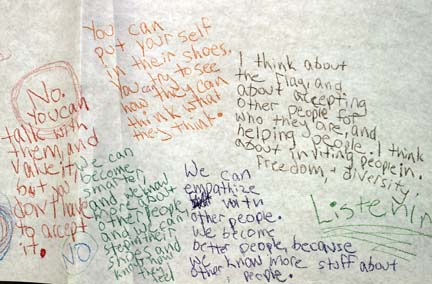 Following the presentation, students participated in small group discussions where they explored different perspectives, learned the importance of expressing opinions with respect, and recognized the value of empathizing—even when you strongly disagree with someone. They also discussed the difference between valuing someone’s opinion and agreeing with it, and the associations they have with the notion of being American. The groups then wrote collective poems entitled, “When We Listen.”

The assembly followed an earlier session of Level 6 students participating in their Intergenerational Writers’ Workshops, during which time advisory groups, along with senior volunteers from the Culver City Senior Center, reflected together on former President Jimmy Carter’s quote, “We become not a melting pot but a beautiful mosaic. Different people, different beliefs, different yearnings, different hopes, different dreams.” 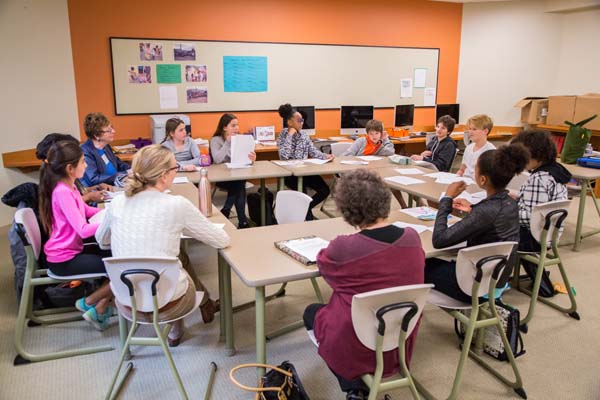 They studied a Langston Hughes poem, “I, Too,” about the struggles of living in our country without the rights that we expect for all of our citizens. One senior volunteer recounted a cross country trip as a child during segregation and the indignity she and her family felt after being turned away from a restaurant after a long day of driving.

Finally, students in Level 8 Art have been studying Japanese Notan design, which explores the play and placement of light and dark elements as they are placed next to the other in the composition of art and imagery. In “notan,” a Japanese word meaning dark-light, opposites complement, not conflict. Neither seeks to negate or dominate the other, only to relate in harmony. The work of Sophie N., pictured below, is a compelling interpretation of this powerful approach. I am so proud of the work our middle school students are doing to think critically about current events and to use education and creativity as tools to promote a deeper understanding and appreciation of others’ interpretations. They are torch bearers for the next generation.